A. IS HARUUN KAL A DARK SIDE NEXUS?
Yes.
quote:
Originally posted by The Ellimist
While Mace notes that the “literal translation” is jungle world, that doesn’t literally mean that the jungle is amped. Literal translations in every language tend to be rather arbitrary, e.g. “kung fu”’s literal translation is work ethic. It certainly doesn’t suggest that the jungle is some sort of potent dark side nexus (not that that would matter much against Windu’s vaapad).
Haruun Kal is likely one of the most potent nexus’ in history. The jungles are completely saturated in dark side energies.
> Mace Windu dares not meditate on Haruun Kal because he might be consumed by its darkness [5].
> Mace Windu hesitates to use Vaapad because falling to the dark side on Haruun Kal is far easier than elsewhere [6].
> Mace Windu senses little light side energy across Haruun Kal besides the innate power inside of him [7].
> “The darkness in/of the jungle” is perhaps the most commonly used phrase of the book after “From the private journals of Mace Windu.”
Does that sound like an imaginary nexus to you? And as to your point that Vaapad counteracts the effects of dark side nexus’ . . . why?
quote:
Source: The Official Star Wars Fact File 112 (2004) 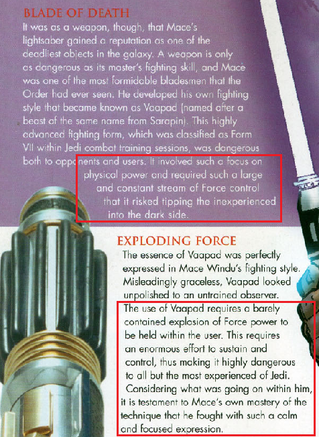